Donate
Home / About Us

Brides Across America (BAA) has been recognized by national media properties, charities and even the White House for our charitable work.

In addition to being featured on numerous national media outlets such as NBC, ABC, CBS and Fox News, BAA has received awards and recognition by national organizations.

Each year People Magazine recognizes organizations that make a significant contribution to a worthwhile cause. Brides Across America has been awarded the People's First Award for helping veterans.

Brides Across America is proud to have been recognized by a national military charity and an initiative sponsored by Second Lady, Dr. Jill Biden, and First Lady, Michelle Obama. 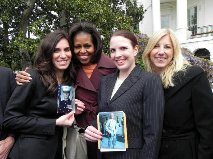 The highest honor BAA has received to date was from the Joining Forces Community Challenge.  BAA and other award recipients were invited to the White House and hosted by Michelle Obama and Dr. Jill Biden.  Twenty organizations were recognized for their contributions to improving the lives of military families.

Run for the Troops 5k

Run for the Troops 5K was initially formed to help raise funds for Homes for our Troops to help them build homes engineered to the specific unique needs of injured soldiers. Brides Across America is one of four beneficiary charities that receive financial support from Run for the Troops.